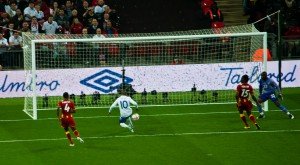 With England due to take on Lithuania in this month’s European qualifier, there has been much debate as to who should be in the squad and who should be left out.

The majority of the focus has been on the Premiership star of the moment, Tottenham’s Harry Kane, who many believe should be definitely included within the squad, especially as he is currently the highest scoring English striker in the Premier League with 16 goals.

Other players who hoping to be a call up to the squad include, Ashley Young who has shown great improvement under Louis Van Gaal and has become a vital part of Manchester United. Liverpool’s Daniel Sturridge should also be set for a recall after missing a number of England games with injury.

Taking into account current form and availability, we think that the England squad should be the following:

Who would you pick for your England squad? Would you favour youth over experience against the minnows or would you just make sure of the win?